HIV/AIDS: Why Are Certain Populations at a Higher Risk? 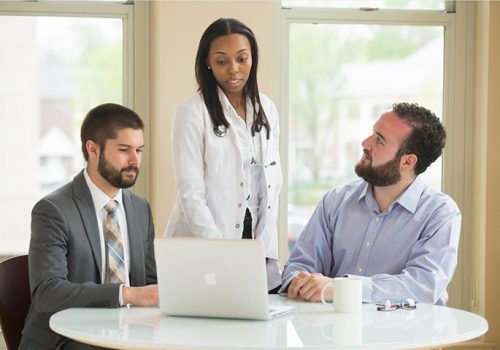 Worldwide, more than 38 million individuals are living with HIV/AIDS, according to research from the World Health Organization. Last year, roughly 1 million people died from illnesses related to the disease, which compromises patient immunity. Since its emergence in the U.S. during the 1970s, innovators in the health care space have rushed to learn more about the disease and to develop new treatments and preventative techniques, according to the Centers for Disease Control. Still, HIV/AIDS continues to affect people around the globe.

However, its impact is not uniform. Certain populations are disproportionately affected. Researchers for WHO discovered that persons in these groups account for roughly 44 percent of all new infections. Health care organizations are most focused on addressing the spread of the disease within these populations, creating programs that often rely preventive counseling strategies with nurses at the center.

A health disparity is a situation in which individuals from certain groups are burdened with higher than average illness contraction and mortality rates, according to an article published in the Journal of the National Medical Association. Health disparities affect numerous subsets of the population. Why do these inequalities exist? According to the CDC, lack of access to care, whether the result of infrastructure issues or socioeconomic conditions, is almost always the culprit. Education level is also a common factor, as members of certain communities are unaware of health risks and neglect to take precautions to avoid contraction and transmission. Additionally, bigotry and racism are often cited as exacerbating factors, the CDC reported.

In June 1981, physicians in Los Angeles submitted a report to the CDC detailing a mysterious pneumonia-like illness affecting gay men living in the city. The document included information on five separate patients, two of whom had died due to fluid buildup in the lungs. This submission marked the start of the HIV/AIDS epidemic U.S., which progressed through the mid 1990s and claimed the lives of tens of thousands of gay men across the country. While survival rates have risen in the years since, gay and bisexual males continue to account for the majority of new HIV/AIDS infections. In 2015, these individuals made up 82 percent of all new diagnoses, according to the Department of Health and Human Services. Why?

Analysts for The Williams Institute at the UCLA School of Law found that an estimated 23 percent of gay and bisexual American males live below the poverty line, reducing their access to care and, in turn, leading to increased infection rates. Social stigma is also a factor, according to the CDC. Negative attitudes toward the LGBTQ community may encourage gay men to refuse treatment or testing.

African-American men are perhaps the second-most vulnerable at-risk group in the U.S., accounting for roughly 44 percent of all HIV/AIDS diagnoses among men nationwide. The mortality rate for black patients is equally disturbing. Nearly 20 of every 100,000 diagnosed die, the CDC found. Comparatively, the death rate for white males is 2 in 100,000. An estimated 78 percent of African-American men diagnosed with the disease contract it during sexual activity with other men.

Many factors contribute to this state of affairs. Poverty plays a central role, as more than 25 percent make less than $12,000 annually, according to the U.S. Census Bureau. Racism may also be a contributing factor, as discriminatory hiring practices prevent black men from obtaining well-paying jobs with medical benefits, analysts for the CDC postulated.

Globally, native Africans are most disproportionately affected by HIV/AIDS. The illness is woven into the country’s fabric. During the initial years of the HIV/AIDS epidemic in the U.S., researchers managed to trace the disease back to the African subcontinent, where it continues to wreak havoc today. More than 25 million native Africans have the HIV/AIDS virus, according to data from global nonprofit AVERT.

The driving forces behind this terrible situation seem to be lack of education and access to care. International and local aid groups are continuing to raise awareness about the disease and establish care delivery outposts to meet the needs of Africans living in rural communities. Discrimination is another key variable, especially for members of the LGBTQ community residing in nations such as Kenya, which has legally banned same-sex sexual activity, according to AVERT. Many gay and bisexual Africans, both male and female, avoid medical treatment in fear of being arrested or ostracized.

Nurses have long led HIV/AIDS prevention efforts for at-risk populations. In 1987, Jolene Noel-Connor, a nurse at Columbia University Medical Center in New York, helped open up an AIDS Clinical Trials Group testing site in Harlem in collaboration with the Department of Health and Human Services, according to the ACTG. Noel-Connor went on to treat countless HIV/AIDS patients and continues to do so today.

Nursing professionals across the country have followed in Noel-Connor’s footsteps. Most of these nurses participate in prevention programs, entering at-risk communities to distribute educational materials and offer advice. Nurses who consistently work with HIV/AIDS patients offer similar counseling pertaining to safe sex practices. Studies show that these behavioral interventions work, according to the journal AIDS Patient Care STDs. And, like Noel-Connor, nurses collect data in the field in an effort to improve treatment methods and, perhaps, one day find a cure.

While this work moves forward, HIV/AIDS continues to spread and disproportionately affect ethnic and sexual minorities. More nurses are needed to join the fight against this destructive disease. Individuals who are interested in making an impact in communities suffering from high HIV/AIDS infection rates should consider the online Master of Science in Nursing program at Bradley University. Through those studies, registered nurses can gain the advanced skills and knowledge they may need to contribute to HIV/AIDS prevention efforts in the U.S. and abroad.

The Positive Role Nurses Can Play in Preventative Health Care

The HPV Vaccine: What FNPs Need to Know