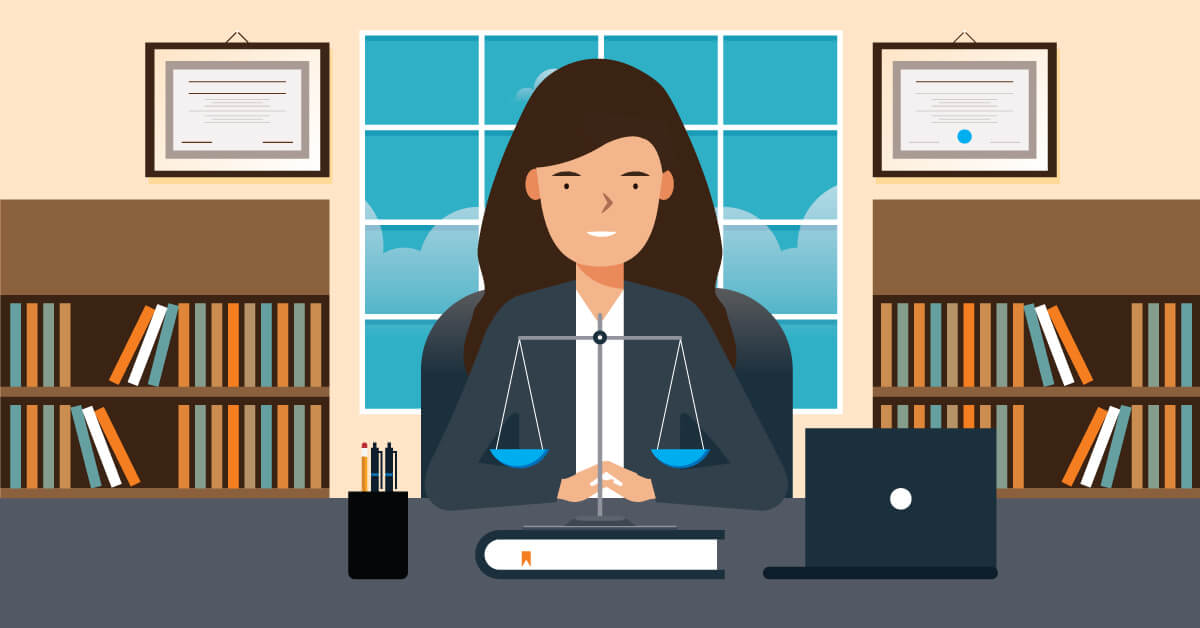 Being a leader means taking responsibility for the success of others. One of the keys to doing well in any profession is living ethically, inside and outside of work. The only way for a leader to demonstrate the importance of ethics to others and the organization is to teach by example.

For education leaders, the goal is to promote fair and equitable access to education resources for everyone, regardless of situation or background. Achieving this goal requires creating an ethical climate that communicates a sense of values, norms, behaviors and attitudes built on respect, openness and fairness.

Understanding the importance of ethical leadership in education is the first step to serve as a model for  all members of the education community.

What Is Ethical Leadership

The National Association of Secondary School Principals’ code of ethical conduct for school leaders states education leaders must be committed to helping every student succeed “by acting with integrity, fairness and in an ethical manner.” The association’s 10 recommendations for education leaders include:

Definition: What Is an Ethical Leader?

Ethical leadership is making professional and personal decisions using moral principles, boiled down to the simple phrase, “Do the right thing.”

Like many complex ideas, ethical leadership is a process that begins with establishing a goal and determining the best plan to achieve it. For education leaders, the goal has three components, including nurturing followers, empowering followers and promoting social justice.

A leader’s intentions, values and behaviors affect their concept of ethics. All three must be guided by consistency and an innate sense of personal integrity based on honesty.

Navex Global discusses some of the challenges in attaching ethics to workplace incentives, particularly financial incentives like a bonus. In addition to the practice being possibly unethical, it may also make ethical behavior feel like an extra instead of a foundational responsibility. Further, it could lead employees to hesitate reporting unethical behavior due to potential economic impact.

Other examples of possible negative consequences of ethical policies include: 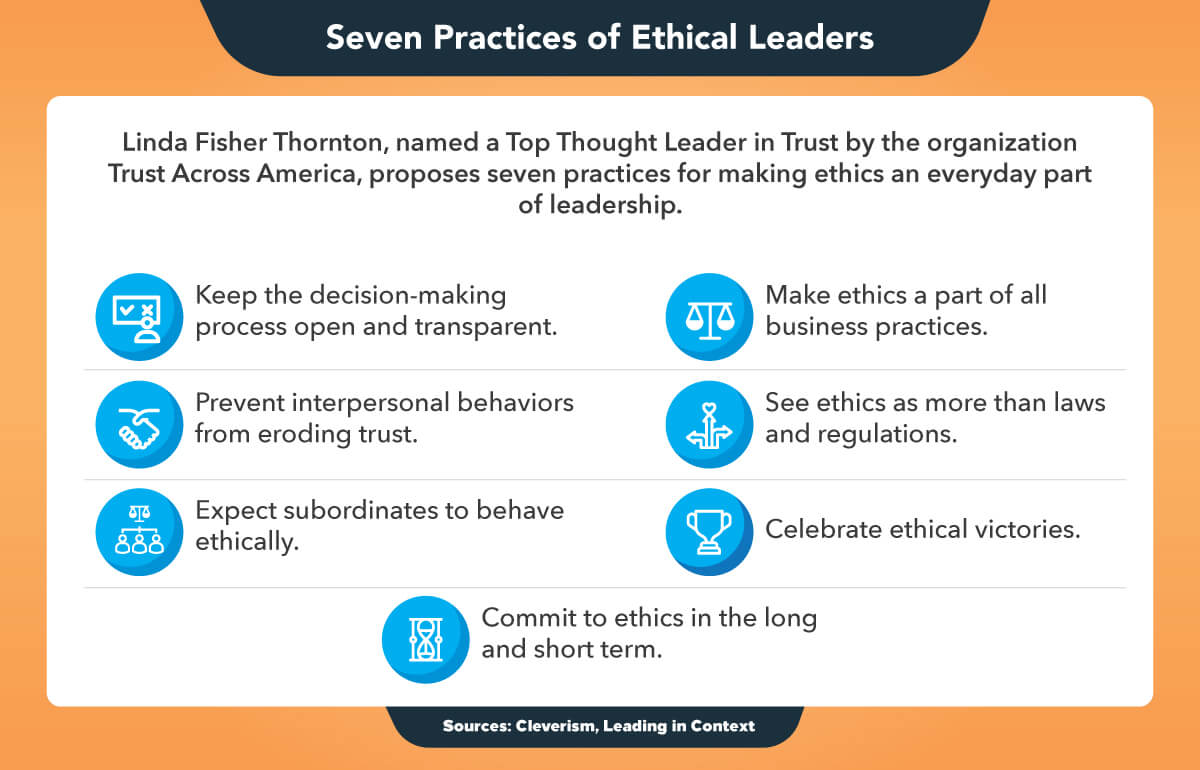 Ethical leadership must be integrated into all aspects of an organization’s operation. Linda Fisher Thornton, named a Top Thought Leader in Trust by the organization Trust Across America, proposes seven practices for making ethics an everyday part of leadership: keep the decision-making process open and transparent, make ethics a part of all business practices, prevent interpersonal behaviors from eroding trust, see ethics as more than laws and regulations, expect subordinates to behave ethically, celebrate ethical victories and commit to ethics in the long and short term.

Ethical leadership theory impacts the work and approaches taken by education leaders. A recent theory of ethical leadership is based on the concept of social information processing. The theory emphasizes the role of emotions in employees’ ethical actions and decision-making.

Through their actions and decision-making, education leaders can nurture an ethical climate in their schools.

Only in the past two decades have researchers established the connection between ethical leadership and positive employee and organizational outcomes. Research reported in the European Scientific Journal indicates ethical leadership motivates employees and improves their attitudes and behaviors. It does so by modeling appropriate conduct “through personal actions and interpersonal relationships” promoted via “two-way communication, reinforcement and decision-making.”

These are among the leading ethical leadership theories:

A technique being adopted by a growing number of organizations to encourage ethical behavior and decision-making is to create an ethical framework employees can use as a model. The framework serves as a guide managers and employees can refer to when faced with moral dilemmas or potential ethical conflicts.

Various types of ethical questions will be considered from different perspectives based on the approach leaders take.

This theory is based on research conducted by Joseph Fletcher, an Episcopal priest who supported both euthanasia and abortion. It posits decisions should be predicated on the immediate circumstances rather than upon fixed law and love is the sole motivation behind every decision.

This theory is sometimes referred to as “moral relativism” and is often mistakenly considered synonymous with situational ethics. It suggests what is ethical behavior in one culture may be considered unethical in another. The theory requires when making a moral judgment about a person, the attitudes of the community the person is a member of must be considered.

Most professions have established a code of conduct or other ethical standards applying to all members of the profession. Examples include the American Bar Association’s Model Rules of Professional Conduct, the American Medical Association’s Code of Medical Ethics and the Association of American Educators’ Code of Ethics for Educators.

This theory is adopted frequently by organizations to ensure managers and employees act in ways  consistent with the company’s core values. Employee actions are determined by their own internal value system with guidance from the organization’s standards for ethical conduct. However, value-based codes of conduct typically require more self-regulation than codes designed to ensure compliance with government regulations.

Individuals judge their actions by listening to their conscience or inner voice. For example, teachers’ interests in their students’ well-being may cause them to spend some of their time outside the classroom participating in activities that improve their students’ educational experience.

This theory applies specific rules to ethical conduct. It’s often contrasted with principle-based ethics, which relies on individuals’ principles to ensure ethical behavior. The concept is also referred to as deontological ethics or Kantian duty-based ethics after the philosopher Immanuel Kant.

The rules that govern an organization or group determine what is ethical behavior. For example, a school’s code of conduct states the rules employees must follow when interacting with students, parents, co-workers and others. The code applies universally, regardless of the specifics of the situation or the characteristics and beliefs of the people involved.

This theory emphasizes the fair and equitable distribution of good and harm. In making ethical decisions, the social benefits and costs must be considered across a broad spectrum of the community. It’s based on the belief that “all equals should be treated equally,” but those whose differences make them unequal should be treated in a way that is fair considering their differences.

Consider the following: All those who do the same job and who possesses equal knowledge and experience should be paid at the same rate. However, workers with more valuable skills or experience may deserve to earn a higher rate.

Ethics Based on General Principles

The principle-based theory of ethics is the basis for the International Federation of Accountants’ Code of Ethics and was pioneered by the Institute of Chartered Accountants in England and Wales. Perceived as more flexible than rule-based approaches, this theory is more reliant on an individual’s sense of professionalism and social responsibility. One downside is enforcement of the code becomes more subjective.

The appropriate action for a given situation is based on generally accepted principles of magnanimity and self-sacrifice. An example would be someone sacrificing personal gain for the good of others or to prevent their harm. Motivation to act ethically lives in the individual’s personal sense of fairness and the equitable treatment of others.

The many approaches to ethical leadership share one characteristic: Leaders express outwardly the values they feel internally. The principles of ethical leadership are based on teaching ethics by example. Steven Covey expresses this in his description of principle-based leadership stemming from the person’s internal values as the basis for their external actions.

Psychologist Lawrence Kohlberg describes ethical leaders as having reached the last of the six stages of moral development. The stages extend from obedience and punishment during infancy to an adult’s moral reasoning based on ethical principles and abstract reasoning. An ethical leader is driven by rock-solid internal principles of justice and fairness that transcend laws and rules.

Historical and Philosophical Foundations of Decision-Making

The root of all behavioral and social sciences is philosophical decision theory, described as a model for rational choice driving human behavior. The primary question surrounding philosophical decision theory is the nature of rationality, a question dating back to Aristotle and revived in the 20th century. Its recent popularity is ascribed to its ability to reconcile belief, desire and action.

Rational decision-making can also be expressed to serve not one’s selfish interests but rather the best interests of others, whether family, co-workers or neighbors. These are among the decision theories impacting ethical leadership.

Applying leadership ethics in an education setting begins by defining the moral and ethical virtues that are the heart of the program and determining the best way to implement and measure the ethical framework. The eight principles of ethical leadership developed by U.S. Army General George C. Marshall include:

Resources for Principles of Ethical Leadership 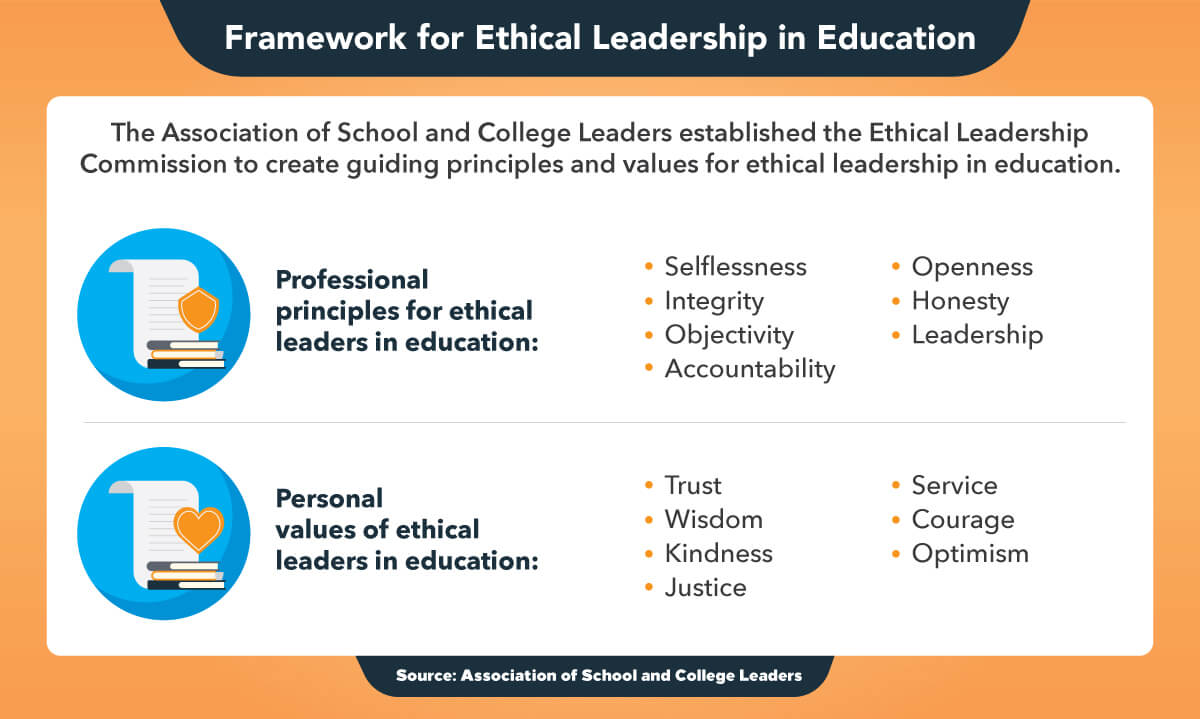 The Importance of Ethical Leadership in Education

The primary reason why it’s important to have ethical leadership in education is the power of example to impress upon the entire education community the rewards of behaving ethically. The United Kingdom’s Chartered College of Teaching established the Ethical Leadership Commission to develop a framework for ethical leadership in education. Among the tenets of the framework is to promote ethical behavior with every decision education leaders make and every action they take.

Why Is It Important to Have Ethical Leadership in Education

Educators have to take advantage of every opportunity to demonstrate through their behavior the values and morals students will rely on for ethical guidance throughout their lives, including:

Instilling a Sense of Ethics in Tomorrow’s Education Leaders

The foundation for ethical leadership in education begins with an educator’s earliest education experiences as a child and is nurtured throughout their training. They benefited from seeing firsthand how a person’s underlying sense of fairness, honesty and empathy is exhibited in their decisions and actions. As such, the cycle of ethical education never ends.

Association of School and College Leaders, Framework for Ethical Leadership in Education

Leading in Context, “Is It Ethical? (Decision Tool Based on the Book 7 Lenses)”