Screen Time for Kids: A Guide for Parents & Educators 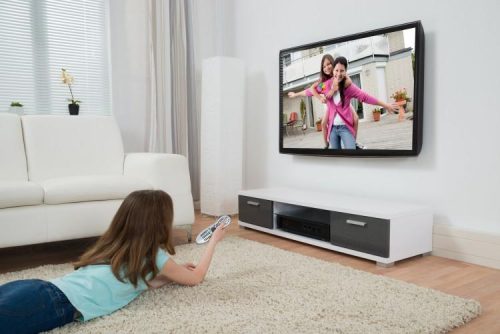 According to a 2018 survey from Common Sense Media, 89% of teenagers reported having a smartphone, and 70% said that they use social media at multiple points throughout the day. A 2016 study from Influence Central indicated that the average age that children get their first phone is 10.3 years old. Screens and technology have become intertwined with children’s lives. While these new devices and platforms have provided ample opportunity to discover new information, share ideas and explore new cultures, kids’ increased emphasis and reliance on such technology has also raised concerns among parents and educators. Some practitioners and researchers believe too much screen time may reduce a child’s attention span; other studies have indicated that increased use of smartphones and digital devices is being linked to poor physical health outcomes, such as obesity, as well as reduced performance in schools.

There isn’t a definitive answer regarding how much screen time is too much for kids, as every child’s health needs are different. However, there are tools and resources that can assist parents, educators and health practitioners, to ensure that children reap the greatest benefit from their screen time.

Historically, there’s been a strong association between screen time and obesity in children. According to a November 2017 report published in Pediatrics:

Teenagers who spend multiple hours on their cellphones each day can eat more food during their screen time use, be less aware of healthy food choices, spend less time exercising and sleep less, all factors that can contribute to obesity and poorer health outcomes.

There isn’t necessarily a right or wrong amount of screen time for kids. However, there are strategies, methods and approaches for parents and educators to help kids avoid the problems associated with too much screen time.

One way parents can help manage a child’s screen time is by placing limits on how long their child can use certain devices. An October 2016 article in the American Academy of Pediatrics (AAP) recommends that children under 18 months old not use digital devices, with the exception of video chatting. Children ages 2-5 are recommended to only spend one hour of screen time per day and to use it on high-quality programs. For children ages 6 and older, the AAP suggests that parents place limitations on screen time and the types of media consumed to ensure that these don’t “take the place of adequate sleep, physical activity and other behaviors essential to health.”

Parents and educators can also help children by encouraging activities that don’t necessarily require a digital device or involve any sort of screen. Parents can help encourage healthy activities, such as playing outside, participating in sports, reading from books and pursuing new, interesting hobbies. Children adopt many of the behaviors exhibited by their parents, so it’s also important that parents act as screen time role models for their children. This can include not checking emails or messages that relate to work while at home, spending time on other activities that don’t involve a screen and even making screen time, such as TV watching, a family activity. For educators, there are methods and practices that can help manage students’ screen time, ensuring that children and teens are receiving the most value from their digital device use. Writing for the Washington Post, elementary school teacher Launa Hall discusses how when introduced as educational devices, iPads still caused many issues in her classroom, even though they did enable students to become enriched by new learning possibilities. For teachers, it’s not necessarily a matter of introducing too much or too little technology, or strictly limiting screen time to a certain period of the day in their classrooms, but of carefully considering the benefits and potential drawbacks of screen time and digital devices. Tablets and computers may be great learning tools for a particular lesson, but an in-person activity may be more beneficial for another. Some students may excel when using more digital learning devices, while others may fall behind and prefer conventional educational approaches. It’s a matter of a teacher evaluating what works best for each student and the entire classroom environment.

There are additional tools and resources that can help parents and educators effectively manage a child’s and student’s screen time use.

Digital devices can help children build new relationships; explore new, interesting academic subjects; and express themselves in creative, fulfilling ways. But too much screen time or improper use of digital devices can also lead to poor health outcomes, be associated with lackluster academic performance, and impair mental and emotional growth.

Ultimately, it’s up to each parent and educator to determine the best use of screen time for their children and students. Each child’s need for and benefits from screen time vary, and parents and teachers need to be aware and cognizant of the impact that digital devices can have.

Recommended Reading:
Practice Independently with an MSN-FNP Degree
Inpatient vs. Outpatient Challenges Faced By FNPs
What are the Benefits of an Online-Only FNP Program?

Sources
American Academy of Pediatrics, American Academy of Pediatrics Announces New Recommendations for Children’s Media Use
Common Sense Media, Social Media, Social Life: Teens Reveal Their Experiences
Engadget, “How to Manage Your Child’s Screen Time”
Influence Central, Kids & Tech: The Evolution of Today’s Digital Natives
JAMA Network, “Association Between Screen Media Use and Academic Performance Among Children and Adolescents: A Systematic Review and Meta-Analysis”
Pediatrics, Screen Media Exposure and Obesity in Children and Adolescents
The Washington Post, “I Gave My Students iPads — Then Wished I Could Take Them Back”

Established in 1897, Bradley University is a private, independent institution of higher learning located in Peoria, Illinois. Inspired by our founder, notable philanthropist Lydia Moss Bradley, we pursue excellence in teaching, research, scholarship and service, and we celebrate leadership, integrity, diversity and collaborative learning. Today, we offer an impressive array of more than 130 undergraduate, graduate and continuing education programs across five colleges and The Graduate School. Widely respected for our outstanding faculty and student-centered approach to learning, we’re able to provide the resources of a large public university—but with the personalized attention of a small private college. With more than 65,000 alumni worldwide, we are full of promise to become one of the nation’s best comprehensive academic institutions.

About the College of Education and Health Sciences
The College of Education and Health Sciences at Bradley University prepares motivated learners like you to become leaders and innovators in the human service professions: education, counseling, nursing, family and consumer sciences, health sciences, physical therapy and administration. We offer a wide variety of cutting-edge undergraduate and graduate programs — each one designed to expertly combine rigorous academics with real-world practice. When you choose to study with us, you’ll be joining a rich culture of collaboration, community and shared values, one that challenges you to grow personally and professionally.

About the Department of Nursing
The Department of Nursing at Bradley University is actively shaping the next generation of nursing leaders. Driven by our commitment to excellence in the preparation of professional nurses, we offer a number of dynamic, personalized nursing education programs to equip you with the specialized expertise to meet society’s global healthcare needs.

About the Department of Education, Counseling and Leadership
The Department of Education, Counseling and Leadership (ECL) is dedicated to educating intelligent and empathetic leaders prepared to help their organizations, institutions or nonprofits thrive even in the face of various challenges. ECL programs combine your professional experience with the latest strategies to enhance your capabilities and provide new perspectives on leadership and your personal leadership style.