What is The Average College Professor Salary? 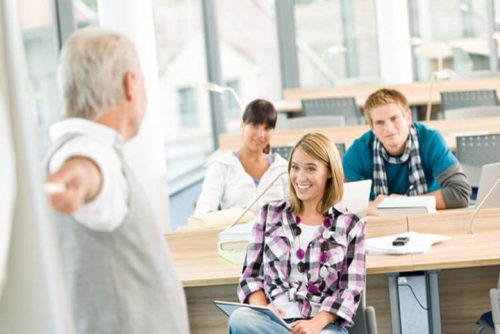 Professors at colleges and universities, comprising four-year institutions as well as community colleges, can earn very different salaries based on factors such as the type of school they work for, the subject they teach, and the length of their tenure. This variety of experiences can make it difficult to estimate the expected college professor salary range, but up-and-coming academics who aspire to take on professorial roles should still study the numbers.

With higher education enrollment projected to rise over the next decade — increasing by 8% and 6%, respectively, for undergraduate and graduate programs by 2030, according to the National Center for Education Statistics — it’s worthwhile for aspiring educators to examine the professor’s role in terms of money, progression, and job openings.

Find out more about the typical salary expectations for college professors and how pursuing an advanced education degree can be a gateway to earning competitive pay rates.

Estimates of the average professor salary across all school types and subjects differ depending on which organization calculates the data. According to Payscale, the median pay for a professor in postsecondary education is around $88,600. The U.S. Bureau of Labor Statistics (BLS), citing 2021 data, puts the median salary at $79,640.

In each case, individual salary amounts vary. Professors who have served for many years in the field, or who teach in-demand subjects, can potentially earn significantly more than the median amounts.

The BLS provides a breakdown of median salaries for higher education teachers by subject. Law teachers were the top earners in 2021, with median wages of $123,470. Engineering and economics were also high-demand subjects, with the median salary for professors in each reaching six figures as well ($104,940). Health specialty professors followed close behind at $102,720.

While these fields represent the top tier of college professor salaries, educators in other subjects are also generally well compensated. According to BLS data, some popular subjects and their corresponding salaries include:

Academic rank is another factor that can influence the salary of a college professor. The median annual salaries for professors by title break down as follows (according to October 2022 data from Payscale):

Progress Based on Experience

One of the most important features of working in higher education is the accrual of earning power over time. While entry-level professors aren’t at the peak of their salary potential, conditions can change drastically, especially for educators who earn coveted tenure track positions — the ultimate mark of job security in academia.

Payscale broke down the progression of professors’ salaries based on their length of service in the field.

In addition to analyzing the earnings accrued due to tenure, Payscale noted that professors’ pay may vary drastically based on where they teach. Professors in New York City, Chicago, and Boston, for example, earn salaries well above the national average.

Entry-Level Roles and Progression for Professors

Those who are interested in the job opportunities available in academic research and teaching, as well as their salaries, should examine likely career paths in the higher education field. Once they’ve found entry-level positions, new professors should ensure they can advance, potentially securing their place by gaining tenure and promotions.

The BLS indicates that a doctoral level education is the widely accepted standard for first-time professors. Four-year colleges and universities will likely be looking for applicants who are doctoral candidates or already have a doctorate. Professional experience requirements tend to be more varied and flexible than academic accomplishments. Depending on the school and subject, professorial candidates may need years of research work or other relevant professional experience.

When teaching a subject overseen by a licensing authority — such as nursing or education — professors may also need to have relevant certifications. The BLS notes that serving as graduate teaching assistants is another way for potential professors to accumulate relevant experience. This option is open to people who attend graduate-level courses in a subject they hope to teach.

The BLS highlights the importance of tenure for educators who plan to make a professor role into a long-term career. Finding a tenure track position can be challenging, as colleges are aware of the value of these positions and are leaning more heavily on part-time teachers. Once on a pathway to tenure, an educator may need up to seven years to complete the journey, as they advance from assistant professor status to associate and full professor. A review board will consider a professor’s contributions to teaching, research, and more to determine whether to award tenure.

A tenured position isn’t the only career outcome for long-term educators, however. The BLS adds that some professors choose administration and become deans or presidents of their respective colleges and universities. People who are interested in taking on the challenges and opportunities of administrative roles may benefit from studying education at the doctoral level, earning a Doctor of Education (Ed.D.) degree, and gaining expertise in the field of academia. This degree may also create opportunities to earn higher salaries for college professors and administrators alike.

Pursuing a doctoral degree related to academia is a path to more detailed knowledge and experience in the field as well as potential leadership opportunities. Candidates interested in becoming professors in subjects such as education, current professors seeking to make a career move into academic leadership, or others seeking a deeper understanding of leadership in colleges and universities can enroll in the online Ed.D. program at Bradley University. In these 100% digital courses, designed to fit alongside a full-time work schedule, students get an expert overview of the concepts driving higher education.

Ed.D. students learn about the trends in colleges and universities today, such as the increasing use of technology as an academic tool and the role of political engagement and policy reform in higher education. The program’s culminating experience is a scholarly research project using the action research methodology to perform vital and relevant studies on the way higher education is practiced today — and how it can be improved to benefit students and educators in the future.

An Ed.D. is valuable to show that an educator has received top-quality instruction on important concepts. With the degree, an aspiring professor will be prepared to excel and advance in academia. A fulfilling career as a tenured professor, a dean, or a school president can empower an educator to make positive changes at a college or university, or in the higher education field as a whole. The road to such a position can begin with an Ed.D.

What is The Difference Between an Ed.D. and a Ph.D.?